William Scott and the Frying Pan

Gradually, while working in this style he begins to flatten out the objects and distort the perspective of the table tops so that they start to stand up and begin to be the flat coloured rectangles and squares that would later become the grounds for his abstracted shapes. Taken to its logical conclusion this trajectory would eventually lead to the spare abstract compositions of the 1970s in which Scott’s continual process of refining his work and his motifs led to the still life objects becoming flattened abstract shapes. Even so, there were enough clues for us to recognize them as the cups and frying pan which he started off with thirty years before. He achieved a remarkable sophistication with these simplified forms laid on a coloured ground. He clearly demonstrated his intention to use the still life to explore the relationship of spaces, forms and colours, as he himself said ‘the subject of my painting would appear to be the kitchen still life, but in point of fact...my subject is the division on canvas of spaces, and relating one space or one shape to another.’ 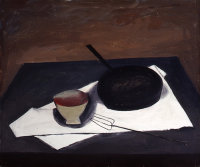